When we heard the Thai new years wasn’t too far away we decided it would be worth it to stay longer in Thailand to experience. Besides we do love this country 🙂

We decided to stay right in the action on Khao San road. Our overnight bus arrived at 4 a.m., 2 hours early – typical with the crazy fast Thailand driving. When we arrived to our hotel we were told our double room wasn’t available, but we could take 2 single beds for the night. We opted to do this since we could get into the room right away and get some sleep.

We didn’t wake up until 1:00 the next day, which is surprising considering when we awoke we could hear loud music and people screaming. We hurried up and got dressed up in our gear ready to get wet as we were suffering from FOMO. We ate a delicious breakfast egg skillet at our hotel restaurant, which I must learn how to replicate. It was literally 10 steps away down on alley before we were right in the action. We immediately went to a stand to buy water guns so we could defend ourselves. I of course needed to have the pink hello kitty gun as it looked fierce.

It was all of about 5 seconds before we were getting squirted at with water guns, buckets of water thrown over our heads, and getting our face smeared with some kind of chalk paint which I learned represents a mark of blessings. The street was so full of people you could hardly move. After a few water gun fights we were soaked from head to toe. It was a blast!

That night we decided to go somewhere where we could stay dry so we grabbed a Tuk Tuk to a 7 story mall. We had to ask people repeatedly not to squirt us while we were stopped at the Tuk Tuk in traffic, thankful everyone but some naughty teenage boys listened. The mall was more of a market than a mall so I was able to purchase a new pair of Havanah Sandals that had broke at the Full Moon Party (which I coincidentally bought in Thailand 3 years ago). I also amazingly found my expensive Gillette Venus & Olay Razors since I had just run out and can’t deal with cheap razors. For dinner we went to the top floor to check out the restaurants. I was craving sushi and there were plenty of restaurants to choose from. I have an obsession with the japanese dining where the food is on small plates on a revolving wire and you can pick as you choose. We found a restaurant like this with your own hot pot buffet. We enjoyed picking endless plates of meats and veggies and dumping them into the boiling soup and dipping them into yummy soy sauce dip!

That night we decided to confirm that we were going to change into our double bed the next day. The lady at the front desk was insistent that she never told us that. We were under the understanding that the twin beds were just for the first night, and we could have the room we ordered online the second night. But she kept telling us we were wrong. We asked her to call her boss to see if we could get a refund. She called and of course they said no. We were pretty upset about this, but also not that surprised as we have learned that “the customer is always right” is definitely not a policy here. Needless to say that put us in a bad mood that night. We still went out to Khao San road that night to check out the night life. Of course people were still shooting off their water guns, which we new to expect but were hoping to avoid getting soaked. Thankfully we found a bar that was considered a dry zone. We made our way down to a different bar that was covered in water and I tried dancing and almost ended up in the splits from the slipperiness!

The next day we decided not to join in the water festivities as 5 hours was enough for us. The challenge would be staying dry. We decided to watch the sunset from one of the famous rooftops. Of course they have a dress code so Rob had to wear long pants and closed toed shoes. We had the dumb idea of taking a tuk tuk and of course got buckets of water thrown at us, despite pleading with them not to. Needless to say we weren’t very happy and we were so over this holiday. 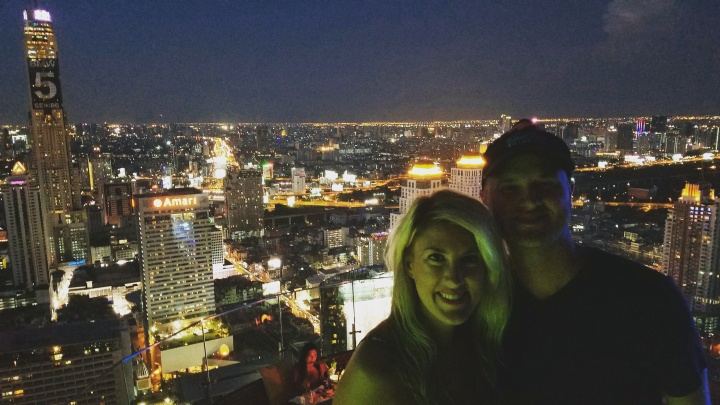 Thankfully we made it through mounds of people to the hotel where the Red Sky bar is without getting more wet. We enjoyed some beverages and free peanuts while watching the sun set. It was a great view. 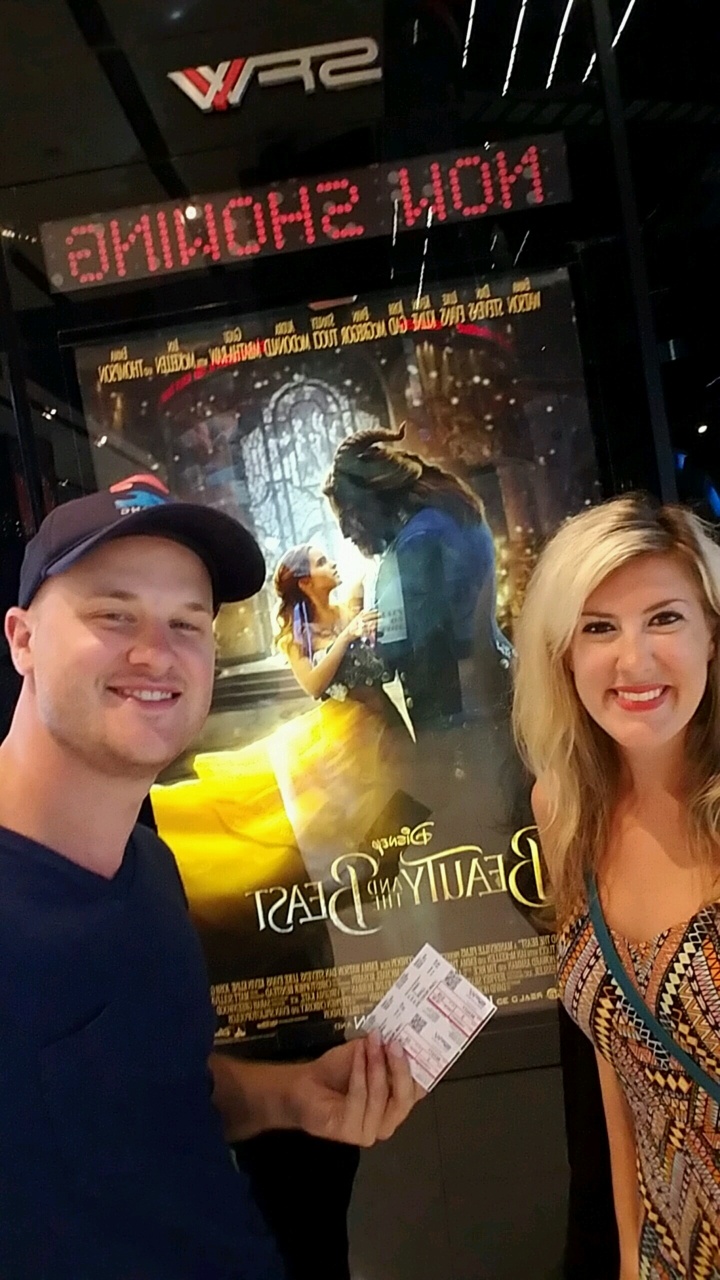 After we went into a different mall that was connected to the hotel (which we were thrilled about since we didn’t have to risk getting wet). We purchased our tickets to Beauty and the Beast and were happy to see that there was a market right next to the cinema! So just like back home we bought a pop and candy and snuck it in the theather in my purse 🙂 I was looking forward to getting popcorn, but they didn’t have the butter sauce like they do back home so we opted for nachos instead. It was the first time we have seen/had tortilla chips here! When we arrived to the theater we weren’t sure if it was the right one because no one else was there. People didn’t start showing up until the previews have started. One thing we were surprised by was that they played a really scary trailer prior to the movie, which I know would never happen back at home considering this movie is PG and that scary trailer was definitely R. Hope the parents kept their kids eyes closed. There were many previews, it lasted about 20 minutes, and at the end they put up a picture of the King and everyone stood while the king’s song was played. It was a very beautiful song. The movie was just as delightful as we thought. 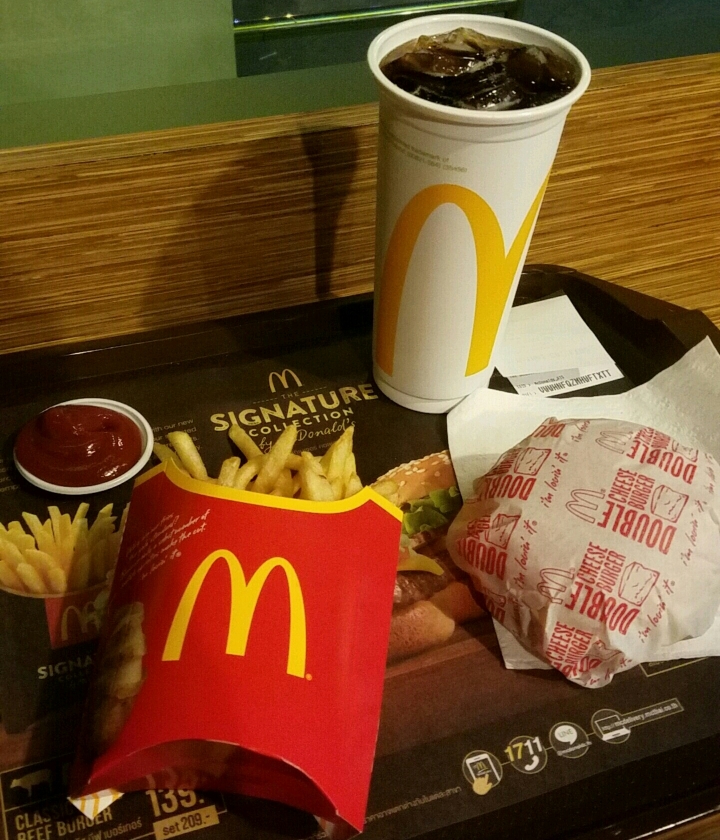 That night we went crazy and got – McDonalds 🙂 We have been discussing trying it for a while out of curiosity. We ordered a double cheeseburger and fries. The burger was good, but not as good as back home, the fries tasted just like home! All in all it was a great date night! 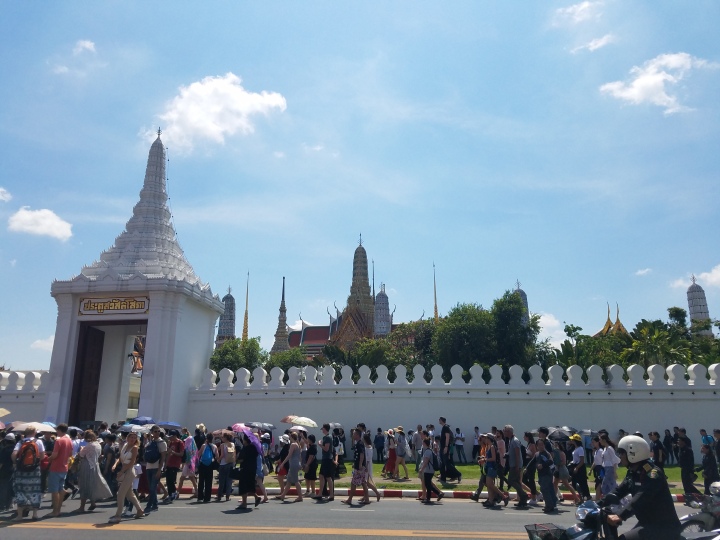 The next day we went to go see the Palace, since last time we were in Bangkok it was closed when we went. This time we ended up in a line of people in the stifling 90 degree weather for about a half hour and we didn’t know why. All the westerners were asking what was going on. Lines of Thai people would just cut in front of us, which I found very frustrating. Finally we realized the reason we weren’t moving is because the King was exiting the Palace. We were told not to take pictures as it was considered rude. Although we were far away we’re assuming the King was in the beautiful cream colored Rolls Royce. It was followed by many red Mercedes. Finally we were able to go to the Palace only to find that because of the holiday they were only letting Thai people in. It was very disappointing.

That evening we headed to the airport to go to a new country – India! We were literally the only 2 white people on the plane. Read about our first reaction to Indian culture in our next blog.