The state of Goa was every backpackers favorite place in India that we met during our travels. We were told the north is where the partying was and the south was more chill. Seeing as we haven’t done any partying in a week to the north we went!

We were told not to book anything in advance by other backpackers so you could negotiate for a better rate. We went to 3 different properties, only one had internet in the room but it didn’t work that well, so we opted for the property with a pool. We were able to negotiate a better rate as the season was starting to slow down for $30 a night for a room with air conditioning, a balcony and breakfast. 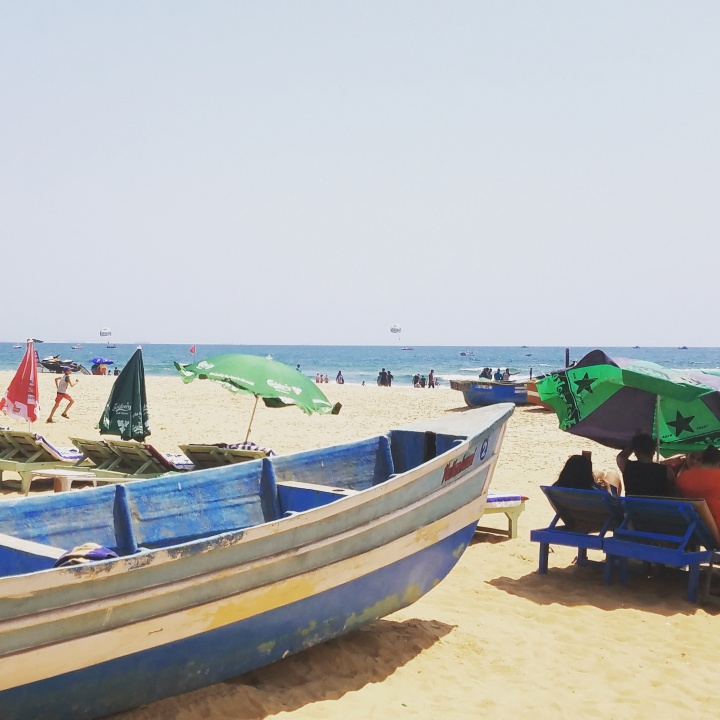 We went to the beach right away for lunch. I ordered the best Greek Salad I have ever had. Rob ordered what he though was a cucumber salad, but it was just straight up cucumbers. We were happy the lounge chairs were free. We noticed the locals selling jewelry kept coming to us and speaking another language to us. We later found out it was Russian because there are so many Russian tourists that come there. In fact we’re pretty sure we were the only people from the U.S. there. The locals are very modest so they just swim in their clothes. So we stuck out like a sore thumb.

That night we went to the Saturday night Market, as I’ve read it’s a popular thing to do. We shared a gyro for dinner and it was almost as good as the ones in Greece. We had gelato for dessert while we enjoyed live music. They even had the India’s strongest man in there and he was dressed in a Santa Costume! We walked around the market a bit to see beautiful spices and teas.

After we went down the main road of Baga called Tito’s to watch Rob’s soccer team, Chelsea. We had met the owner of this bar earlier that day and he said he would hook us up, and he sure did! We met fellow Chelsea supporters and rooted them on until in the end victory was ours! After we walked the main road to check out the bar scene, but we were not very impressed as you had to pay in to get in everywhere and it was 99% dudes. We decided our time would be better spent getting Domino’s and watching a movie in bed 🙂

The next day we went back to the beach and you won’t believe what I accomplished – I actually finished reading a book! Keep in mind that is quite the accomplishment for me as I’m not much of a reader. I read “Why Not Me?” By Mindy Kaling. And let me tell you not only was it an easy read but it’s also hilarious as Mindy is a comedic writer. On our way leaving the beach some guys asked if they could take a selfie with us. Before you knew it we were a line of people waiting to take their picture with us. So funny 🙂

That evening we decided to go for dinner at a Chinese restaurant as we had seen many signs for it in India but hadn’t tried it yet. We have really missed take out Chinese back home. We Ordered chicken szechuan with fried rice, and it almost tasted like home! I wanted to try the orange sauce and the restaurant owner was nice enough to bring it out for free! The soy sauce was very different, more of a thick black substance that was less salty. But in the end our tummy’s were satisfied. That night we decided to check our Anjuno beach, about a 15 minute cab ride away. There was supposed to be good nightlife here. We had to pay a $3 entry fee per person to get into the restaurant just to find a DJ playing techno music with an empty floor. We walked the beach to check if any other places were hoppin’ but it was pretty dead. So we stayed for one drink at a cute bar on the water. I had a mojito that was made with the fruit that cashews come from. They said they were only able to make them for 1-2 months a year depending on the season. After that we decided that another Domino’s pizza sounded nice and a movie in bed.

The next day we took a taxi about an hour south to Palolem beach. Read about our relaxing time here next.

One thought on “Baga, India”