I was very wary of going to Mumbai because I have heard a lot of negative things. One of them being that people go to the bathroom (both number 1 and 2) right on the street, so therefore it would smell terrible. The other one was that it is so polluted that the inside of my nose would turn black. Thankfully I didn’t find either one of these things to be true! In fact I found Mumbai to be quite a beautiful city.

The one thing we didn’t like about Mumbai is that we couldn’t find a $30 hotel like we were used to. We had to splurge and spend about $65 per night for a nice hotel in Calaba where many of the tourist attractions are. The security guard was very obviously checking me out as he “greeted” us. I had read this would be common so I just ignored him. When our Uber arrived 2 men literally grabbed our suitcases out of our hand to put them in the trunk and asked for money. I had read about this. We refused to give them money for as we didn’t ask for their assistance. That may sound rude that we didn’t give them any money, but when you travel as much as we do you come across many beggars. And as much as you want to help everyone you can’t possibly. We are more in favor of buying people food when they ask for money.

We stayed at the same hotel chain as we did in Bangalore as we had a good experience called Treebo. Upon arrival we received a room with 2 twin beds – tis the risk of booking the cheapest room. Thankfully we were able to upgrade to a room with a double bed, of course we had to pay for it. That night when exploring the town we discovered a beautiful roof top restaurant called Koyla. I felt like I was walking into a fancy Vegas lounge. Being the classy people we are on a budget, like usual we split a meal and a large bottle of water. The meal we had was called chicken tangine. It was a very flavorful dish that I’m hoping I can replicate back home.

The next day we went sight seeing. We were just going to walk to the first stop and than get ubers from there, but a taxi driver asked us if he could take us on the whole tour for $13 without air conditioning.  We thought that seemed more than fair. As we started driving we realized we would be constantly stuck in traffic, horns constantly honking as this is normal here. Without the breeze from the windows we were dying from the heat so we upgraded to air conditioning for $2 more. Our first stop was the laundry area. It doesn’t sound that exciting, but it did seem like you were stepping back in time when you saw a bunch of concrete blocks and men scrubbing clothes and than hanging them to dry. Turns out only men do this job while the women are cooking all day.

The next stop was the beach. You couldn’t actually swim in it. It was more of a view point of the city. It was very beautiful. Of course we had 2 guys from India ask to take a picture with us like usual 🙂

After we went to the hanging gardens. Although the gardens weren’t really hanging. The dirt paths were surrounded with beautiful trees and bushes covered in flowers. It was a very pretty, yet super hot walk so we made it quick. After we ordered a grilled cheese sandwich at a stand. Now I wasn’t expecting exactly what we would get back home as simple bread and cheese, but what we got was not what I expected at all. It was more of a bread rap filled with veggies – no cheese, with curry sauces to dip in. Regardless we ate it and it was still good. But we’re pretty sure that was not the meal that we ordered.

Next we went to Gandhi’s house. It was set up like a Museum so we read many articles, and read descriptions of miniature models depicting his life. One of the things I found most interesting is he wrote to Hitler asking him to stop his actions during World War II.

After we went to a famous mosque on the water called the Haji Ali Dargah. The only way to get to the mosque is via a pathway that gets covered with water part of the day. There was a large group of Muslims waiting until the path was no longer under water so they could go to the mosque.

After we stopped by a train station. It was clearly British architecture, among many other buildings in Mumbai. I actually found Mumbai to be on of the coolest cities in India based on it’s architecture. The problem being next to most old and beautiful buildings, were buildings next to it that were run down. 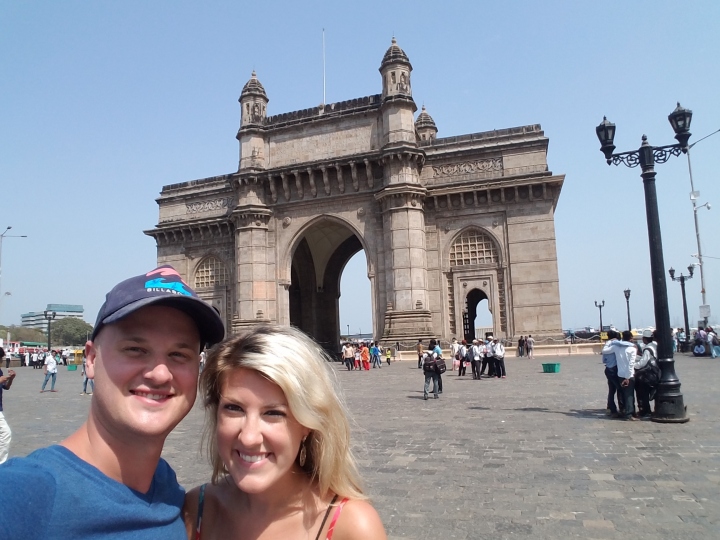 Our last stop was the gateway of India. Read more about it here. 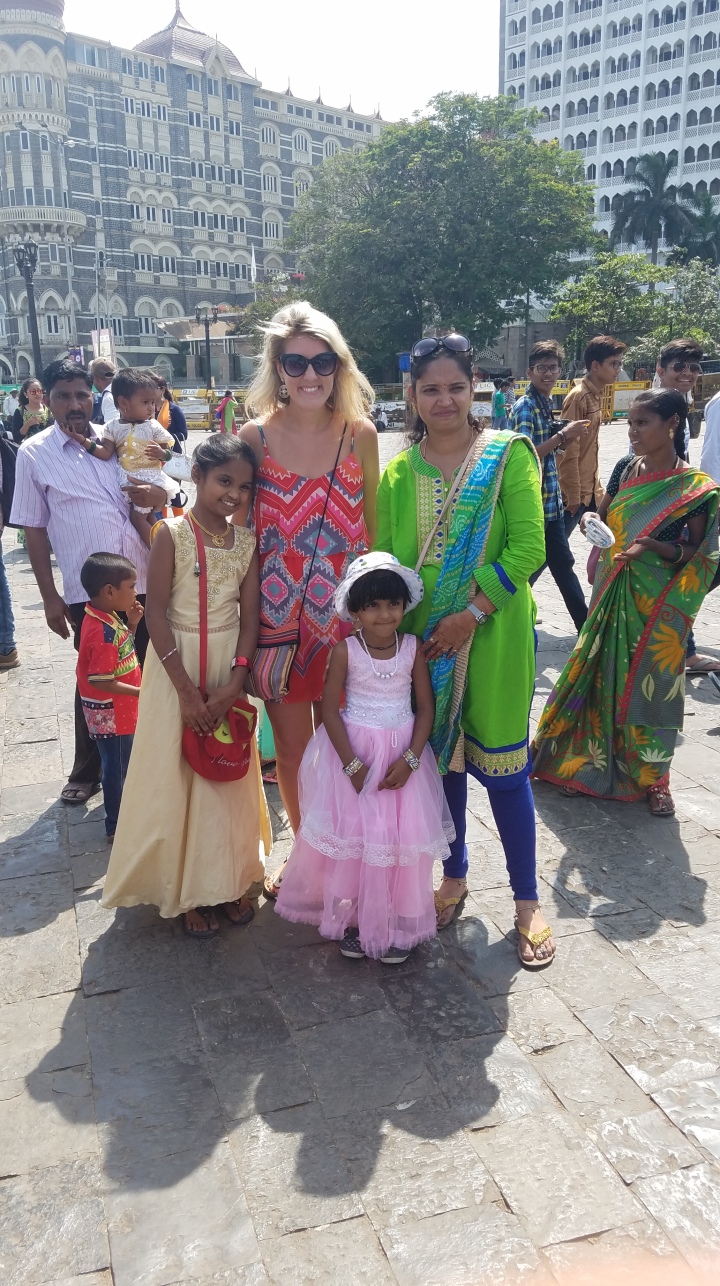 During this stop we were asking to take more pictures than we had the whole trip! This particular picture is my favorite because instead of creepy guys, who usually ask my picture, it was actually the little girl next to me that really wanted to have it but I could tell she was too shy to ask. She looked at my as though I was a Disney princess. It was absolutely adorable.

Next to the gateway of India was the Taj Mahal hotel overlooking the water. We decided to sneak in here to take a look around. Although really I’m sure I could have just asked for a tour by showing my travel agents I.D. We really wanted to use the pool as it was such a hot day, but decided it wasn’t worth the risk of getting caught.

That evening we decided to hit up the nightlife of Mumbai. We were hoping to go out with a local we had met in Goa, but he was told he had to stay home and study for college. So we decided to go out for Karaoke nearby. In between songs the DJ would play songs and the men would dance together. One of the things I love most about this culture are that the men love to dance, and that they will dance together. It was very entertaining.

We wanted to find a way to the Taj Mahal the next day, but the trains were sold out and flights were too expensive. We contemplated skipping it and flying to the next country. We were also feeling quite home sick at this time. We decided to ask a travel agent who said he could get us on the train if we booked a tour with him. I’m sure that wasn’t true, but even though it cost a bit more it was nice to have the next 5 days planned for us. That evening we boarded the train to Dehli for 17 hours. The family who sat across from us had about a 7 year old boy and 4 year old girl. They didn’t speak a lick of English. But every time they would look at us they would have a big smile across their face. It was adorable. We watched some tv shows, received 2 meals and before you knew it it was bed time. We folded down our bed, it was 3 bunk beds on each side, and fell fast asleep. Before you knew it we were in Dehli!