On our last night in Dehli we decided to participate in watching the countries most popular sport – Cricket. It was just as crazy as we anticipated. It was mainly men – I think I saw about 5 girls out of over 5000 guys seated in our section. We were the only foreigners there.  When we first sat down the guys in front of us were really excited. They were waiving their flags, they asked for pics with us and when we went to get food one of the guys said he wanted to Ddnce with Rob when he came back. Don’t worry – he wasn’t hitting on him. One of the things I love most about Indian culture is that everyone loves to dance! A random tune would come on during the game and everyone would start dancing it was the best. One of the oddest things was that they had cheerleaders, but none of them were from India they were all Western. They hardly ever faced the audience, it seemed like they were more performing for the Camera.

There were only 2 options for food – curry or Dominos. Seeing as we were sick of curry, Dominos it was. We decided to change to the sitting only section, which turned out a lot of people were still standing. Many people were very assertive in telling the people in front of them to sit down. There were a couple times that the stairs would get filled with people and the security guards would get them to move so we could actually see the game. There was a little brawl that occurred one of these times. Another brawl happened when a woman was asked to get down from a railing, she was arguing with the officer and you could tell she didn’t want to move. We both just looked at each other and said “This would never happen back home, you would get kicked out in a heartbeat.” The game was getting intense as the score was high, but it looked like Dehli was in for a comeback! We decided to move again to an area with hardly any people around so we could actually see the game. Before you knew it we were surrounded with people. Some were secretly taking pictures of us, one guy asked to take a picture of us – but when he asked to sit in between us I said no as some guys have gotten a little close to my bum when they put there arm around me and I was not about to let that happen again! And there was a really loud drunk guy so we decided after being there for 3 1/2 hours we would call it a night.

We tried getting an Uber but they never showed. So than we tried getting a tuk tuk and they were all overcharging us. One guy said he would bring us for 200 rupees, and when we went to get in his Tuk tuk I wanted to confirm it was 200 total, than he said it was per person – very very sneaky sir! One driver didn’t speak English so a local was kind enough to translate. When he asked for 300 rupees the local replied, “WHAT?!!!” He knew we were clearly getting ripped off because we were foreigners. The next guy said 500. We were getting no where, and were so frustrated. Finally I went up to a driver and boldly said “This is where we need to go (pointing to our map), and don’t charge us more just because we’re white!” He offered 200 rupees total and we went with it. I know we were arguing over mere dollars, but it was the principle of it. 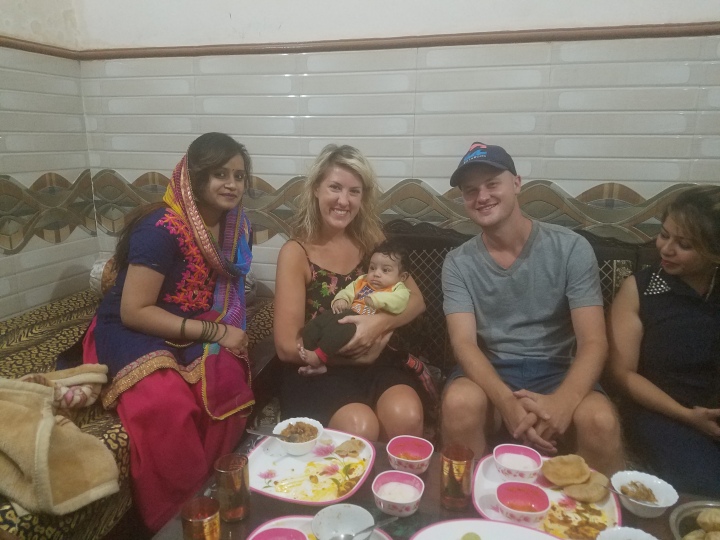 The next day we were invited to have lunch in the home of the teacher we had met previously that week. We took an Uber about an hour outside of the city to his home. We were greeted by his wife, his brother, brother’s wife and child and his father. His wife and sister-in-law prepared a wonderful lunch for us that included curry, a lentil/potato soup, roti, veggies in a yogurt sauce and a coconut dessert. It was so nice to have a home cooked meal. We than spoke with both the teacher and his brother, who is also a teacher. They expressed how honored they were to have us in their home. It was so kind.

Next they took us to the school on their motor bikes just a short ride away. They told us they learned to ride when they were just 8 years old! When we arrived to the school, Trailblazer Academy, we were greeted with thunderous applause from 72 students! To think these kids chose to be here – some of them left there jobs and were waiting over an hour just to speak with us just showed how dedicated they are to learn English. It was so overwhelming I almost cried. Than they placed what looked like a lei around our necks as a sign of welcome. We sat in front of the class where they took turns asking questions. Many asked what we thought of India and the food. At one point we split up into boys and girls and the girls asked me what was the secret to my beauty – so sweet. They asked me my hobby, and when I told them I liked to sing they insisted I sing for them! I didn’t want to at first, but eventually I gave in and they recorded every second lol.  Most of the students were between the ages of 14-18, but one student was in his 40’s. The teacher explained that he was a farmer, but decided to move to town to learn English. You could see the excitement in his eyes and it was inspiring. We felt so privileged to be invited to the school.

After reflecting on our 3 weeks in India it was definitely the most unique experience we had out of all the countries we have been to in the world. It was hard to see that is was a poor country, surrounded by many extremely wealthy people. There were people in shacks and people in mansions. There was garbage on the streets. The men would stare at me, but I never felt they had any intent on harming me. It was more of a fascination with a different culture. Although we had some tourist hiccups along the way, and it was unsparingly hot, in the end it was the people that made India. And the people were amazing!