Along with Laos I had also never heard of Myanmar before this trip. But it was the talk of the town among backpackers as a must do before it gets too touristy. Our original plan was to go here after Pai, Thailand as we were so close to the border. Unfortunately, there weren’t any transfers that were allowed to cross the border that was closest. Than we were going to fly from Chang Mai, but decided we had missed the beach so went back to Thailand at the point. So here we are, towards the last month of our trip trying to evaluate where we want to go. Despite being told how hot it was going to be in Myanmar we decided to brave it out and go anyways.

After going to India, nothing was going to be as hot as that place! We arrived in the original capital of Yangon. We took an Uber to our hotel and went right back to sleep as we had flown in on a red eye and were tired! When we woke up we ate at a food stand just outside our place some delicious noodle soup. Than we saw a movie theater and Rob had been wanting to see Guardians of the Galaxy Vol. 2 so we decided to go, and buy the “premium” seats for $3 per person. We grabbed some sweet popcorn out of a stand outside, some candy, and fountain soda for the movie. We were happy to see our “premium” seats were actually a little love seat with pillows. Also, the movie was in 3D! It was a fun date night.

The next day we went to see the Shwedagon Pagoda. Upon entrance I was wowed by the amount of gold on top of this temple. We were clearly one of the very few tourists here. I was quickly approached by some local women who asked to take a photo with me. After taking several pictures they wrapped there arms around me so it looked like we were hugging in the photo, thankfully I don’t have space issues with strangers 🙂 Meanwhile Rob was haggling with a tour guide who showed us around the place. I was most shocked by all the jewels/jewelry that Buddhists donated that is just sitting inside of the top of the temple that no one can even see; millions of dollars worth. We were told they donate their things so they will get good karma. That night we took a night bus to Bagan. 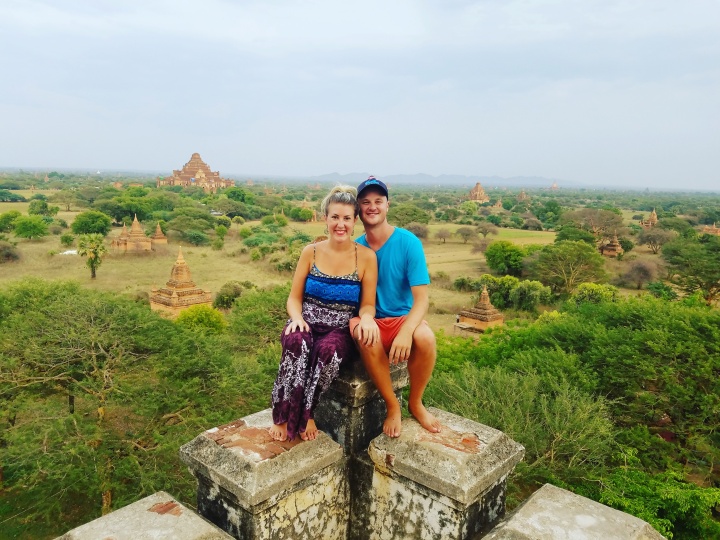 We arrived at 5 a.m. and were very happy to be able to check into our hotel right away. We were very impressed by the hotel. Our room was very large, a little odd the fact that it was shaped like an octagon and the bed was on the floor but was overall nice! When we woke up it was nice and hot so we decided to take a dip in the nice pool. We met the cutest little boy, probably the son of one of the workers, who was about 4 and didn’t speak a lick of English. But he did love to walk by randomly give the thumbs up, it was adorable. We decided to go to a large temple to watch the sunset. It was a beautiful view of the thousands of smaller temples that surrounded it. We walked around the temples and explored many of them. All of them including Buddha statues of their own. The next day it was hot, we were feeling lazy and “templed” out, so we just laid around the pool. That night we took the night bus to Inle Lake.

We stayed at a hostel. Unfortunately our room wasn’t ready at our 4 a.m. arrival but they did have a rooftop room with beds to sleep in so that did the trick. When we awoke we paid to use a hotel pool for just $2 per person. We had the pool all to ourselves! For dinner we ate Shan style noodles and it was delicious – super salty but I like it. The next day we went on a tour of Lake Inle. We boarded a long boat along with 3 other girls from our hostel. It was a full day tour where we watched fisherman, went to a village on water, watched families bathe in the lake, and stopped at some sweet temples.

That night we took another night bus back to Yangon to board a flight back to Bali, Indonesia. Although we had been here before, we were excited to see more and get some much needed beach time! Read about the Gili Islands next.